A little note about this post. Every day for the last 800+ days, I’ve constructed a list about some topic. The lists always have at least 10 thoughts or ideas around the theme. Today’s topic was “Making Side Projects Fun Again” and I felt it’d make for a good post here on Dev-eryday. I feel that every software developer has some degree of struggle around side projects. We’re not all robots that can pump out code 18 hours a day, but we’d all like to create cool side projects. If any of this helps a single developer get closer to delivering a project this post was worth it. What follows is the list as it was written, enjoy. 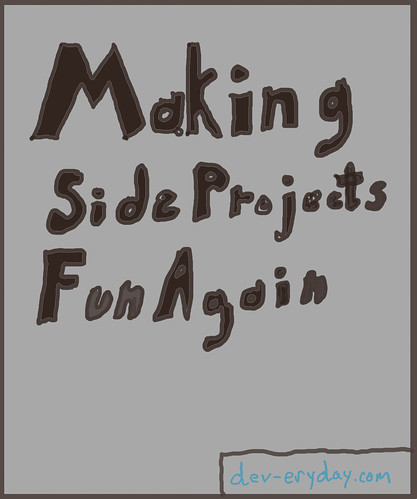 Side projects, I have a most conflicted relationship with them. It should be a purely positive experience, but unfortunately, it’s not. Side projects come with expectations. When they don’t meet those expectations, it becomes difficult to justify working on them in the future. From there, the next justification is, “Why do it at all?” None of my side projects are likely to ever become huge, and that’s okay but it’s fun to dream. Past performance is not a guarantee of future outcomes, but it makes it harder to go all in on something new when nothing from the past has worked out yet. That, and it’s not easy for anyone to put in a day of work at a full-time job only to come home and put in a few hours on a different project. Low odds of pay off and already being tired are the two key reasons I don’t produce side projects as often as I’d like. That’s going to change though. I have all these ideas; I need to start getting stuff out there. Ideas are cheap, implementations are where it’s at. In order to move into a reality where I’ve implemented some cool stuff, I want to make it as attractive as possible to work on these extracurricular activities. Here are some things I’m going to do to shift my reality. I’m going to make side projects fun again.

I’ve gone through starts and stops working to build an app where people could post and share similar lists of ideas like this (idealistz.com) but have been unable to launch the project yet. I’ve created the bulk of the functionality I would want in the app, but I always drop working on it. Until I get that app live, I’m going to post any of the lists I write that feel like a natural fit for Dev-eryday. In the meantime, I’m going to try to make side projects fun again and hopefully get to work on the ones I’ve got on the pipeline.