The Five Languages in Five Weeks was an incredible challenge. I’m glad that I went through it as it was a perfect way to close out the first year of Dev-eryDay. I got to spend Christmas with Go, and ring in the New Year with Swift. It was certainly an unconventional holiday season. In spending time with a new language each week, I learned a lot about programming languages and getting up to speed quickly with different workflows. Exploring new programming languages was a refreshing way to sharpen my learning skill set.

Coming in to the challenge, I had a strong feeling that one week wouldn’t be enough to really learn any of these languages. One week definitely wasn’t enough time, but it did build my language learning skills. Therefore, the time was well spent. Through going through the initial process of learning a language for five straight weeks with five different languages, I got really comfortable with that initial discomfort of learning something new. This challenge, and the skills developed within, will help me every time I try to learn something entirely new. 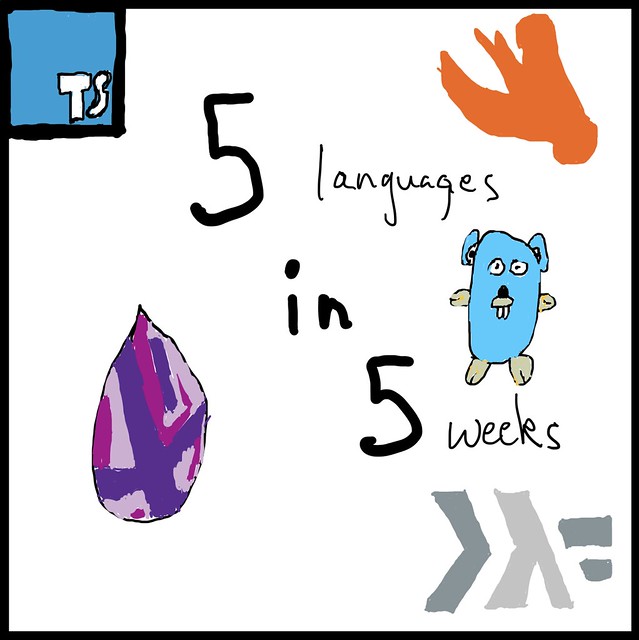 Week One: TypeScript - My study of TypeScript took place between December 1 - 7, 2017. The introduction post for the language can be found here and the review of the week can be found here.
Week Two: Elixir - I learned Elixir from December 8 - 14, 2017. Here’s my intro and outro for my week with Elixir.
Week Three: Haskell - December 15 - 21, 2017 was Haskell time. Haskell’s introduction and recap are online.
Week Four: Go - I spent Christmas with Go as it went from December 22 - 28, 2017. My plan and weekly follow-up are live.
Week Five: Swift - The challenge closed out with Swift December 29, 2017 - January 4, 2018. The Swift posts can be found here: intro and review.

### Subjective Language Rankings Before getting into my quick take observations, let’s look at my rankings. Going through a week with each of these languages, I was able to form opinions about each of them. Note that this is a purely subjective ranking. It is based purely on how much I enjoyed my week with each of the languages. The rankings aren’t directly based on any metrics measuring the power, expressiveness, or technical merits of the languages but I’m sure those things factored in a little bit. So if I had to rank them, here’s what I’m feeling right now:

Each language is praiseworthy. I actually enjoyed coding with each of them and could see myself using any of them in the future. I don’t think I could’ve picked a better group of languages.

These are some quick observations I wrote down when writing an IdeaList in the middle of the final week of the challenge.

So that’s it for Five Languages in Five Weeks. I hope you enjoyed following my experience, or even better, maybe inspired to take on a similar challenge. This is experiment was the perfect extension of Dev-eryDay. The process of getting better at something every single day is the whole goal of Dev-eryDay, and the Five Languages in Five Weeks challenge takes that idea to the extreme.