Released in 2010, Jez Humble and Dave Farley’s Continuous Delivery: Reliable Software Releases through Build, Test, and Deployment Automation has become the go to resource for teaching software developers about deploying software. The book aims to teach readers best practices on how to release software as quickly and as safely as possible. The most successful technique that the authors have found is through the use of continuous delivery.

Since I’m reading this book, I want to take the time to record some thorough notes, so I can come back to them later. It’d also be nice if they helped anyone else gain knowledge too. Therefore, I’m going to record my notes here at Dev-eryday through a series of posts. There will be three total posts, one covering each section from the book. This post covers Part I, Foundations. I’m also considering doing some videos on YouTube where I go over the notes covering a couple of chapters at a time. I think that would be a fun little experiment.

The first four chapters of the book cover some foundational pieces that make continuous delivery possible. First, we’ll take a general look at exactly what the problems with delivering software are. Then we’ll start digging to concepts like configuration management, continuous integration, and testing strategies.

Chapter 1: The Problem of Delivering Software 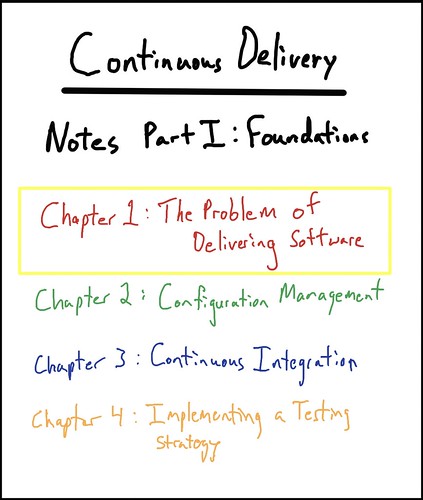 Our goal as professional software developers is to turn ideas into working software as quick as possible. The aim of Continuous Delivery is to introduce to tactics and best practices that can enable us to not only deliver software faster, but to also make it more reliable, supportable, and maintainable.

There are a lot of common release antipatterns. These include: deploying software manually, deploying to a staging environment only after development is complete, and manual configuration management of production environments. Generally, automate what you can and deploy both early and frequently.

Benefits of continuous integration include:

Today, containerized environments are a perfect example of how all of these concepts have been baked into the modern deployment process.

Some Best Practices for Software Delivery

Chapter 1 is a high-level overview of what’s to come in the rest of the book. Key points: automate what you can, release often. 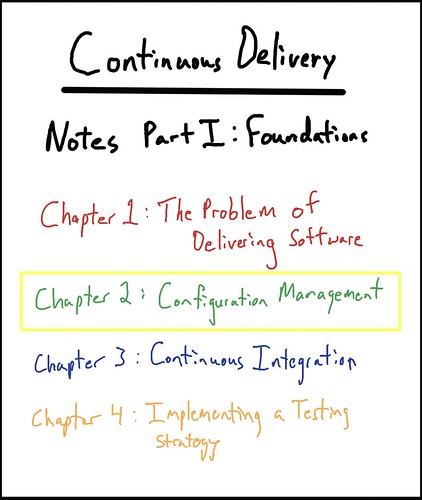 configuration management - the process by which all artifacts relevant to your project, and the relationships between them, are stored, retrieved, uniquely identified, and modified.

The first step towards configuration management is to use version control. Version control, sometimes referred to as source control, allows us to capture every change made to a codebase. Every change is traceable, and we can revert to any version of the file that came previously. Having an official record of each change allows for teamwork across the codebase. Any file related to the project should be stored in version control. Some popular version control systems you can use today are: Git, Team Foundation Server, Mercurial, Subversion.

Build out a system for managing dependencies. If your code depends on third party libraries or components, be sure to make a copy of all related files for each version. Being able to swap versions in and out as needed is a useful option to have. Exercise caution with checking your dependencies into source control as check in size can balloon.

Application configuration should be handled the same way at every deployment level. Keeping things configurable is a good quality to strive for, but do not let the configuration flexibility kill system usability. Complex configurations are a major pain point and often lead to code that is difficult to maintain.

Your application configuration values are every bit as important as your code. That means that you should test your configurations and check them in to version control just as you would your code. The same applies to your deployment environment. There needs to be a way to verify and record any changes that are made to your system environments.

The goal of Configuration Management is to be able to recreate your production system easily from scratch, revert to a previous version of the system, and to know that deployment environments are set up in the same way. 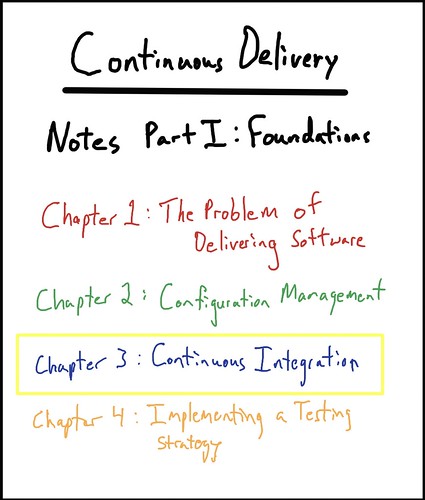 Continuous Integration (CI) is the practice of building the entire system and running through the automated tests after each commit. This practice solves the problem of lengthy integration sprints periodically throughout the project. Rather than performing integration at some scheduled point of the project, integration is performed every step of the way. CI leads to quicker release times, less bugs, and a better sense of how the entire system is coming along.

There are three prerequisites for continuous integration. They are:

There are a number of techniques that can be used in order for continuous integration to be applied smoothly. 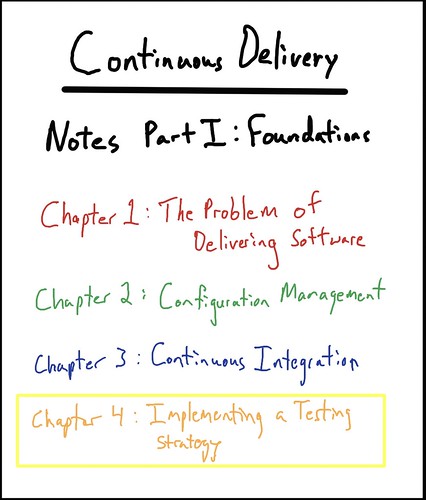 A thorough, up-to-date test library is a boon to any software project. Tests bring confidence through demonstrable proof that the system works as expected, they document expected behavior, and lead to better coding practices due to the patterns required to make code testable. Testing should be performed throughout the development process, not all at once at the end.

If possible, teams should make sure they have automated tests where applicable. Automation brings many benefits including, but not limited to, faster feedback loops, decreased tester workload, allows for regression testing that ensures new code doesn’t break old functionality, and the tests act as living documentation for how the system should act. Regression tests support refactoring which can greatly improve a codebase. For new projects, write automated tests as soon as possible so that the project can take advantage of them. The authors sum it up saying, “testing at the right time leads to better code.”

If you are in the middle of a project without tests, target the most important and high-value portions of code first. For legacy projects, first automate the build, then create some automated functional tests around the project. As changes to the legacy system are needed, create tests on the current functionality and the changes that are made to validate what you can. Add tests overtime where they’ll deliver value, soon enough the codebase will have a reasonable level of test coverage.

integration testing - tests which ensure that each independent part of your application works correctly with the services it depends on.

Related Resources Worth Checking Out